We are proud and honored to get the opportunity to advocate for climate action as part of the delegation of the Marshall Islands at COP26 climate conference in Glasgow. We had two very nice events where we presented the achievements of Waan Aelõñ in Majel (Canoes of the Marshall Islands) in gaining climate change resilience by reviving the traditional outrigger canoe.

A recorded video of our session is here available on demand (requires free registration).

We are currently assembling our proa to prepare her for the first sea trial. I wish we could work in this speed:

Fortunately, Proasis is, despite of her length of 9m, light enough to move her parts around without a crane or other machinery.

Northern Germany got pounded by a heavy snow storm with wind up to 60 kn the past couple of days. The roaring sea caused some scary erosion to our shorelines, drowning land which has been there since the ice age.

Clear reminder that we all share the same ocean: If sea level rises in the Marshall Islands it does over here as well.

Look how pretty the yellow is on this sunny cold day. Today we took some pictures for a local newspaper. We will keep you updated. 😉 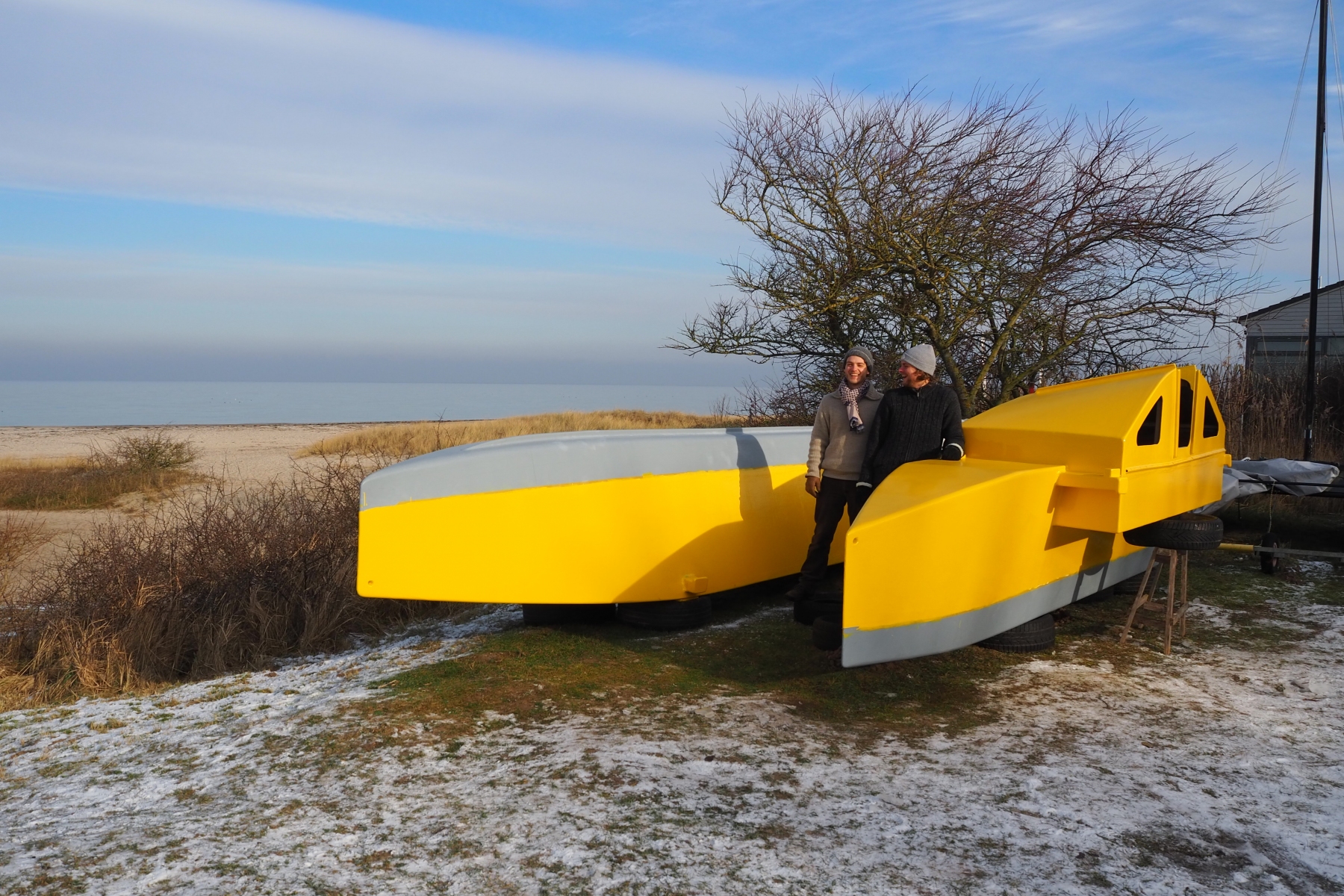 Proasis eventually made it to the ocean for the very first time. We managed to ship (well literally truck) her to the spot where we want to launch in summer. With all the Covid measures in place it was quit a struggle to manage the hole operation.

We plan to finish and launch proasis as soon as the weather allows it in spring. Stay tuned!

We became friends to the famous German circumnavigator and adventurer Burghard Pieske short after he returned from his “Ana Varu” voyage early 2019.

Ana Varu is a pacific proa. Burghard sailed her from Taiwan to the Marianne’s where he successfully supported the local boat building and sailing communities. Unfortunately “Ana Varu” capsized and was lost to the big blue. But we doubt that the Ana Varu voyage is over yet! Further information can be found here and here.

Aside of his interest for the pacific sailing traditions, Burghard is an expert for European sailing history too! Especially the viking age era in northern Germany and Scandinavia. As part of the Euro Viking project he uses his knowledge for a training program for socially disadvantaged youths and put them back on the road of life. Burghards work is outstanding and deserves honor!

250000 people marched in Berlin, 1.4 million in whole Germany and multiple more around the entire world!

We are amazed and grateful to be part of making environmental protection and conservation a mass movement!

A house by the sea

Imagine you live in a house close by the beach. The noise of the breaking swell, seagulls in the air and the salty taste of the ocean breeze will accompany you every day. Sounds great? Off course it does, at least one reason why 80% of the human population lives close by the ocean side. But the dream of a place by the sea is turning into a nightmare: a rising sea level is eating up the shorelines, causing soil salination and squeezing out the freshwater lenses of islands or low lying coasts.

I didn’t thought too much about all of this until I got a job at “Waan Aelon in Majel – Canoes of the Marshall Islands” about green shipping in Majuro, Marshall Islands. The Marshall Islands are a small island nation in the central Pacific between Hawai’i and Papua New Guinea. The country consists of low lying coral atolls only with the highest elevation a few meters above sea level. Short after arriving in Majuro, the capital of Marshall Island, I found the most beautiful islands I could have dreamed of, settled by wonderful gold-hearted people. But at the same time the Marshall Islands are a cumulation of almost every problem humanity caused worldwide so far: cultural damage by colonization and Americanization, drug abuse, high radiation level by nuclear weapons, overpopulation, urbanization, plastic trash, deforestation, overfishing, coral bleach, (water) pollution and the most dangerous to a low island: sea-level rise (by climate change). Most of these problems are not caused by the Marshallese people, but they are suffering. The scientist’s predictions don’t sound very promising: a couple of decades, or half a century until the islands will be uninhabitable due to the rising sea level! The population will be forced to leave their ancestors homeland – a cultural genocide.

So all hope is lost?

Not yet. The small NGO “Waan Aelon in Majel” (WAM) copy the upcoming challenges since 30 years by preserving native culture (especially boat building and sailing), offers a perspective for young people to make a living and creating awareness for the climate crisis.

As a child of the East-Frisian island Norderney I know the oppressive feeling of being surrounded by roaring waters during the storm season in winter since I can remember. But still, it was the work of and for WAM which was an eye-opener for me. Norderney and her 6 sister islands consist of fine white sand only and elevate a couple of meters above the north sea. Without any protection around they are as vulnerable for erosion as a sandcastle.

Back in Germany the daily routine and all projects I previously had been involved felt pointless compared to the real challenges of our future. Step by step the idea of combining what I’m good at (building boats and sailing) and the desire to be a part of the solution shaped out of the fog. Christian came back to Germany a couple of months later (he worked for WAM in Majuro, too) and was immediately hooked by the idea: Proasis was born.

Every island and every shore in the world shares the same ocean with each other and is already affected by the rising sea level. Its a fight for the island I call home, for the land of our Marshallese friends and for the far majority of the human population. We can only fight (and maybe still win) it together!

The Proasis project will carry the spirit of WAM from the Pacific Ocean to new, somewhat colder waters around northern Europe. To create awareness and demonstrate an alternative way we will design, construct and sail Proasis, a pacific based proa (outrigger sailboat, see “What is a proa“). Proasis will be powered fossil-free, simple and low cost. By using mainly recycled or degradable materials she will be eco-friendly with a small footprint.

Our goal is to be visible on the water as an eye-opener for as many people as possible, in the same way, WAM has been an eye-opener to us.

Inspired by the traditional boat building skills of the Marshall Island and the work ofthe NGO Waan Aelõñ in Majel (Canoes of the Marshall Islands) we will design, construct and sail a pacific proa, a very special and unique double hulled sailing boat. Proas.is or Proasis is a mix of the word Proa (the name of the pacific outrigger sailboat) and oasis. It will be our oasis when we cross the great water deserts of our planet.

The domain .is doesn’t sound familiar? It is the national domain of Ísland (Iceland). We chose this domain, because the server farms are powered mostly by geothermal energy (therefore carbon neutral) and for the side effect of the name combination.