As already reported we took the canoes for a trial and sailed to the uninhabited island Bok. It is only 50 m in diameter and nobody is living there. As part of an international cooperation I (Henrik) will collect litter on various places throughout the Marshall Islands. The litter is not just collected but sorted, counted and weight. In addition it is tried to figure out where the individual items come from, mainly by looking at the labels. This kind of survey is usually done on a 100 m long sample of the coastline. For Bok island I had to shorten it to 20 m. There was just to much trash to collect it all in time. The 20 m already resulted in 4 h work and a huge pile (about 1 cubic meter!). That said I couldn’t even pick all of it because it is pushed deep into the shoreline vegetation by waves. Its just crazy how much trash you can find on these uninhabited islands. But the most crazy thing is that after picking it all up I had to put it back on the beach because there is no place in the entire country to get rid of it! 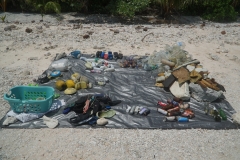 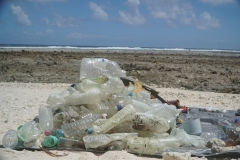 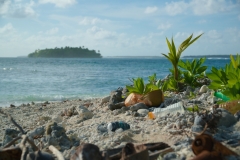